Whenever they say that a US town is steeped in history, I am a bit curious. Used to history that stretches thousands of years, the 500 plus years window seems strange! Atlanta, the capital of the southern state of Georgia, however attracted because ‘Gone with the wind’ is set there. A majestic book and a fabulous movie are great to attract one to a town. Atlanta today is a sprawling, laidback city, which in December had a balmy winter. It is a hub of a large number of industries, has the world famous Georgia Tech University, the Centennial Olympic Park and the Martin Luther King Jr National Historic site.

The house of Margaret Mitchell, writer of ‘Gone with the wind’, is in the middle of downtown Atlanta on one of its Peachtree Avenues. The name Peachtree for streets and roads in Atlanta is bewildering. So many have the name “Peachtree” that unless you have the correct address the day can be spent on countless ‘peachtrees’! The small house is surrounded by a fence, with a plaque outside. You can step in if you pay the entry fee. Margret Mitchell created her masterpiece in that house; you can imagine and be grateful.

Wandering through other ‘peachtrees’, one reaches the World of Coca-cola. Headquartered in Atlanta, the Coca-cola company runs this is an attraction in downtown Atlanta. Priced at 16 USD per adult for entry, it is worth a visit. The centre has something for all – kids, coca-cola lovers, skeptical adults and curious geeks. The mystery of the coca-cola secret recipe is very well represented and spun. They even claim that Coca-cola left India for over twenty years to maintain secrecy! From 4D films, bottling processes to how coca-cola has been represented in popular culture over the ages, it is a great place. 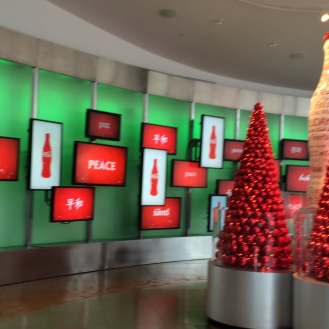 I learnt that the modern image we have of Santa Claus, comes from Coca-cola. In 1931, Coca-cola company commissioned Haddon Sundblom to develop advertising images of Santa Claus. Inspired by Clement C. Moore’s Famous poem “’Twas the Night Before Christmas,” the jolly, round, and warm Santa Claus we know came into being.

There is a hall where you can taste for free all the cola drinks coca-cola sells around the world. As you sip you realize, much like the regions, the cola too has a different tang and flavor! Begun in 1886, as a soda drink in a chemist shop in Atlanta, the world of coca-cola is a tribute to the power of ideas.

The other corporate headquarter that attracts tourists is the CNN center. Housed in a huge skyscraper, its hub is a huge food court with countless screens, a CNN store and lots of people. There are a number of tours that run there. If you are interested in journalism and how news stories are made it is a great place to visit.

Far away from the corporate buildings is the Martin Luther King Jr memorial site. Free to visitors, it gives a glimpse of the life and times of this charismatic pastor who had a dream that inspired countless people. The impact of Mahatma Gandhi on this civil rights leader is well documented, and a statue of the Mahatma adorns the site. 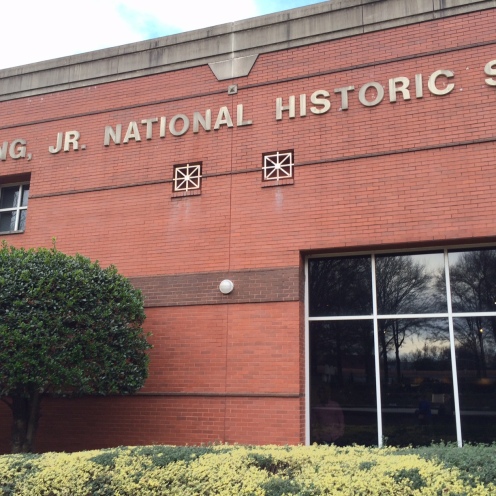 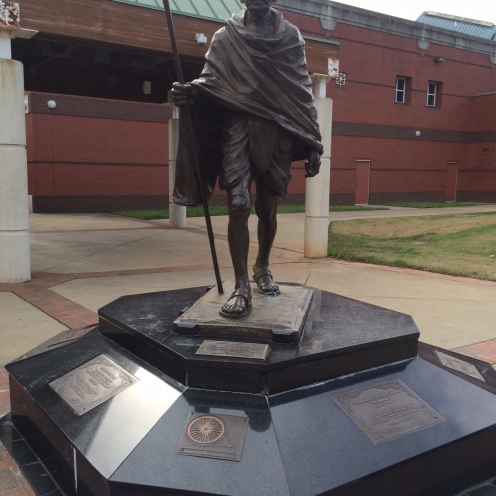 A former president of the United States, the affable Jimmy Carter came from Georgia. The Jimmy Carter Presidential Centre is located in Atlanta in a sprawling campus. A library and permanent exhibition, among others, document the life and contribution of Jimmy Carter. Still active in public life, he was a peanut farmer who went on to win the Nobel Peace Prize.

Apart from its contribution to contemporary American life, Atlanta also offers adventure and fun. The Stone Mountain Adventure Park, about 20 miles from Atlanta is a great place for family adventure. There are many paid attractions like the cable car, train ride, laser show, etc. However, the best part is the hiking trail to the top of Stone Mountain, which is free. The hiking trail is rocky and steep at places. The vista of Atlanta and north Georgia keeps getting prettier as you climb. The top is at 1686 feet above sea level, and gives a 360 degree view of the landscape. An interesting feature of the walk is the number of people who are on the trail. We met quite a few young Indian students from Georgia Tech University. The climb is tiring, but exhilarating. The air is crisp and the view clear. It is half a day well spent.

Atlanta may not be steeped in history from an oriental perspective, but it does resonate with imprints of America’s past. The past has ‘gone with the wind’, and the city today is modern, new age and grasping the future with an impatient hand.