We Don’t Need Spiderman, We Need The Heroism of the Ordinary People

As we, the everyday citizens, bunker in the confines of home, chased by an invisible enemy, for all of us, suddenly, there are new heroes to applaud. 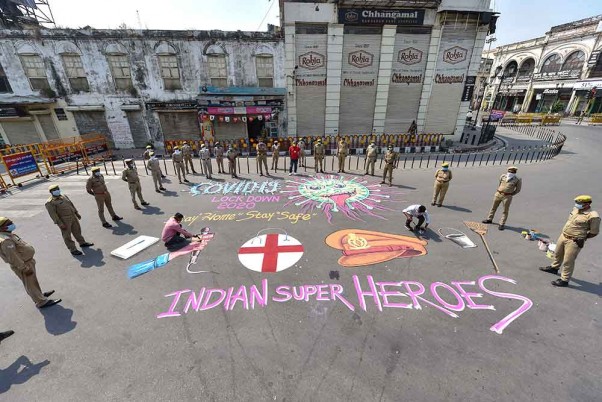 A few days ago, a rather touching photo was doing the rounds on social media. The Tamil Nadu police was giving a guard of honor to the sanitary workers of the Tirunelveli Corporation. A singular gesture of appreciation for the everyday, ordinary work of cleaning. So routine as to become almost peripheral in our visions, the idea of ‘cleanliness’ has acquired a new centrality, a keener edge, in this challenging time.

The routine, what we take for granted, our assumed safety nets…these are now central to our consciousness for a reason. We have all clapped from our homes for healthcare workers, delivery people, sanitation people and the police to signal our respect for their service, courting great risks to personal safety, during this time. Echoes of this new sensitivity—this appreciation of the sacrifice of frontline workers—comes from across the world. As we, the everyday citizens, bunker in the confines of home, chased by an invisible enemy, for all of us, suddenly, there are new heroes to applaud.

Who is a hero? According to the Cambridge dictionary, the word signifies ‘a person who is admired for having done something very brave or having achieved something great.’ The word originates from the Greek ‘heros’, literally meaning ‘protector or defender’. While broad definition stays stable, the concept that fills out the word—those who are thought of as heroes—keeps changing with time. Since a hero is someone ‘admired’, the idea of heroism stems from the perceptions of those who surround one. The idea is closely linked to society and the times in which the actions of the hero unfold.

After 9/11, fire-fighters had become heroes in the US, as they had lost many of their own in an effort to save lives from the inferno. The Time ‘Person of the Year’ has in the last few years nominated ‘The Protester’ (2011, participants in protests like Arab Spring, Occupy movement etc), ‘Ebola fighters’ (2014), ‘The Silence Breakers’ (2017, MeToo activists) and ‘The Guardians’ (2018, brave journalists). Increasingly in our times, the collective of a kind is the hero—the entity that pushes change, faces challenges at a risk, is not an individual but a group. Probably lending some credence to what Yuval Noah Hariri says in Sapiens: “Fiction has enabled us not merely to imagine things, but to do so collectively.”

Heroism is different from altruism. A heroic act is performed in service to others in need, but in addition it involves courage in the face of odds and often personal risk. It is the ordinary (person/group) that becomes extraordinary in the quest to face unprecedented circumstances.

Maybe that is why we are today applauding the new warriors—those that ensure we manage to live a semblance of normalcy in the face of a creeping enemy smaller than we can see. Societies need heroes because they provide us with a sense of optimism about the present and hope for the future. Or we need just plain humanism. We have seen police officers in Spain play music in the streets to entertain home-bound populations. Our own police personnel have become creative, and often acquired the hue of a saviour.

Every day we read about health workers testing positive for the virus in their line of work, even dying. And then we read those reports of deplorable assaults on them, which even led to the issuing of an ordinance providing for stiff penalty. Still, we expect them to attend to us, in utter disregard for their own safety. And they are there. They return to screen people in areas they were assaulted in, and return to duty if they recover.

Many first-responders have started living away from their homes to protect their families. What for us is WFH—work from home—is, for them, SAFH. Safe away from home.

The delivery boy who comes to our doorsteps with essentials, the newspaper vendor, the vegetable seller with the pushcart, the ambulance drivers, the municipal workers—the list of our new heroes is long and full of ordinary folks. Their conventional everyday work has become extraordinary in these times.

Two people dressed up as Spiderman during the exercise hour in the UK to entertain children confined in lockdown some time ago. But the comic book heroes endowed with supernatural powers who descend as avengers in movies…they are mere entertainment. They do not inspire the awe of heroism in us. It’s the hitherto unsung and unseen heroes that we clap for and owe a guard of honour to. When the virus is conquered and our lives are returned to us, we will walk alongside our heroes doing our everyday work, and for once our heroes will be part of our lives, not someone on a pedestal in the distance.

(Sadhna Shanker is an author and IRS officer. Her latest book, ‘Ascendance’, is literary science fiction. Views expressed are personal.)