One of the comments I got on Whatsapp for my first post on this blog “Beyond comfort zones” was ‘you should have tried Google maps!”. That post had been about communicating with people and finding places. That comment stayed with me. Like much else that is falling by the wayside in social interactions due to the march of technology, getting lost and then for asking for directions too has fallen in disuse. With GPS enabled cars, or in the alternative Google maps in everyone’s palm, the world has indeed become an oyster. Now we cannot get lost.

Getting lost in a neighbourhood, and accosting a local to ask for directions, was such an integral part of life. There was much learning from that small event. Setting out in our small car in the 70s and 80s, I recollect clearly how often an argument would break out when we would be searching for a destination on the streets of Delhi. My mother would keep pushing my father to ask someone, while he would stubbornly resist. As the years passed, and before Google maps came to the rescue, I understood that this resistance to ask for directions is a very male phenomenon. From cab drivers, to brothers, to friends and husbands, the resistance pattern was similar and marked. Men resist asking for directions, unless they are well and truly lost! Now of course, they meekly follow the voice emanating from the phone to reach their destinations, which often is female!.

Asking for directions – a small interaction would often open windows to the culture and tradition of a different place. While living in Syria from 2003 to 2006, we often drove from Damascus to Aleppo. The biggest city on the way used to be Homs. It was an industrial centre with nearly half of the country’s refining capacity located there.

It was also the city that contributed to Syrian humour. Much like our famous ‘sardarji’ humor, Homsi jokes were a part of Syrian life. At any Syrian gathering a joke about Homsi people was the best icebreaker. The spirit of the Homsi people became evident once while we were searching for the Chambers of Commerce in Homs. We stopped, and our Syrian driver asked a traffic policeman standing at the crossing the way. They conversed rapidly in Arabic. After listening to the directions, as we were about to drive off, the cop stopped us and asked the driver something. Our driver delivered a long monologue and only then the policeman waved and let us drive off. When asked, the driver clarified that the policeman had stopped him to repeat the entire directions to ensure that we did not get lost!! It was an incident that stayed in mind and always evoked a smile. I wonder often if Homsi jokes still survive in Syria!

While in Japan for two years in the early 1990’s, asking for directions and understanding them was a daily struggle. That is when I discovered that the Koban or Japanese police box, the smallest unit of the local police was the best place to go. As a ritual if I was stuck somewhere I would look around for a Koban. One normally did not have to go far to find one in the busy streets of Tokyo. The moment I would enter, a  foreign looking woman, a polite but slightly worried looking policeman would attend to me. He would be very relieved when he would comprehend that all I was looking for were directions. 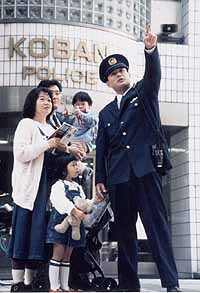 Language was always the barrier, so invariably the policeman would come out and walk to the point from which I had to turn or cross. At times, they even drew a small sketch and handed it to me. Bowing in thanks, and saying “Domo arigato” was something I got trained for from my gratitude to the polite Koban policemen. Later I learnt that one of the designated duties of  the policeman, ‘omawari-san’ at the Koban is to give directions to people!

I remember as a child that in small town India, asking for directions often got you information about the people you were visiting,  or even guidance about what is well known in that town or city. It was a social interaction, often two three locals would congregate to engage with the visitors.

The advent of GPS technology has in a way removed the strangeness of any place. Key in an address, and in any part of the world one can reach the destination without getting lost. It is a blessing, but as with any other gift of technology it takes away something from our lives.

Getting lost at times did open up new and uncharted territories and vistas. One  could be directed to the road less travelled and something unknown, yet breathtaking was revealed. The pleasure and discovery of asking for the way is soon going to be lost to us!