“Iwe stood up with a start. What she had just processed was beyond something she could even imagine, think or dream in her world. It was startling, disturbing and at some level, disgusting. could there ever have been such an interaction with those creatures on the other side of the Fence? It was probably a bizarre rumour that the men were trying to spread. Iwe was shaking her head as she stood in the darkness. she felt strange and disoriented. Maya’s story seemed like a fantasy that had no basis. ‘I don’t want to know anymore, Maya,’ said Iwe, ‘the creatures you describe may look somewhat like those on the other side of the Fence, but they were obviously a different species that died on earth.’ she stood near the dark window and tried to feel the familiarity of the night as it enveloped the city around her.

A man had found elone? Why had she never been told that by anyone? And if that was the case, why did the men bring them to elone too? The whole story smacked of a plot.

Tioni sat there transfixed. Iwe’s abrupt movement had stopped the input. Men and women had shared such a dramatic physically intense activity. It was unimaginable. What was it that had compelled them to do something like that? The physical form seemed to provide some strange joy to both of them as they indulged in that activity. It seemed alien, new and incomprehensible. Tioni continued to sit near the screen. The story did not throw light on how creations had happened on earth. even if it was a fantasy, Tioni thought Maya’s story was fascinating. ‘Maya? How did creations happen then? Who is this “dad” that Ria keeps referring to? Where is she now? Your creation?’

The silent hum of the machine was the only answer. ‘Maya, don’t leave. Please complete your story,’ Tioni persisted.

‘I haven’t gone anywhere. Iwe’s abrupt exit made me lose the thread of my story. Well, creations happened when a man and a woman made love at a time when the woman’s body was fertile. Physical intimacy led to procreation. sometimes, fertilizations also occurred outside, but women always carried the baby for nine months and gave birth through a painful, laborious process. “dad” was one of the terms kids used to refer to the man who was their father. Men and women needed each other to create, Tioni. We were dependant on each other for procreation since the dawn of time. somewhere along the way, it changed. so, now Tara is created from a cell provided only by you and is nurtured in an incubator. she is handed over to you when she is fully formed. On the other side, men can do the same. You do not need each other for reproduction any more. The basis for civilization has changed.’ Tioni absorbed all this information. Many questions were brewing in her head. ‘Where is Ria? And the man she called dad?’ Tioni asked again.

Before Maya could reply, Iwe suddenly came and sat near the workstation. ‘This “love” between those men and women, what did it even mean? I checked the Lexicon, it defines “love” as “a deep feeling for someone or something”. What was it, Maya?’

Maya’s tinkling laughter dissipated the stress that had accumulated in the room. Outside, the night was disappearing and a faint light was embracing the city.

‘It is ironic, girls. Millions of light years away, in a world that does not even use the word anymore, the meaning of love still puzzles humanity. Love is whatever it is to the person who feels it. It can be exhilarating and uplifting. It can also hurt and cause pain. But for me, it is energy—positive energy. It never disappears even when it is up against a non-receptor, it simply transforms to fuel different dimensions of life.’

‘Maya, Aryan was wrong. even though we all use the name he gave this planet, “elone”, no one knows who discovered it,’ Iwe pointed out. Tioni was a little surprised. The things about Maya’s story that struck Iwe were different and quite distinct from the ones that impacted her.

‘What were you wrong about, Maya?’ Iwe tried to stop her from leaving.

‘When men and women stopped needing each other for procreation, the conflict did not stop. It sprouted wings and escalated, beyond our wildest imagination. It took a form that none of us could foresee. Look at where things are in this day and age!’ ”

Imagine a world where men and women live as antagonistic species. How would they react when they learn about their shared past…. 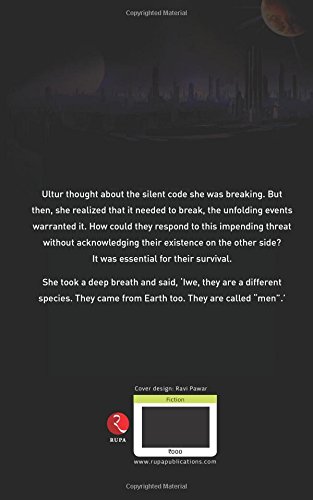 Check it out at http://amzn.in/eTfHlQM