A very detailed and interesting review of Ascendance. Enjoyed reading it. 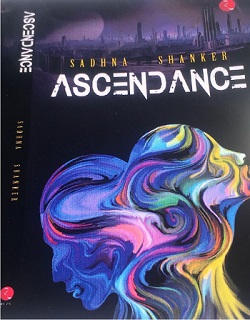 Set far away from the present day conundrum -stricken life on earth, “Ascendance” by Sadhna Shanker endeavours to explore the idea of new social constructs and tries to imagine life in remote future. The author catagorises the book as a literary science fiction which is a little dystopian in temperament. Unlike conventional science books, “Ascendance” does not portray the conflict of human beings with aliens and machines. The book skilfully depicts the eventual change brought in by science in the lives of men and women with a tinge of philosophy. It lays more emphasis on the philosophical assessment rather than the enthralling occurrences. The whodunit factor of the book entices a mystery loving brain and calls for more attention towards its subject, where you are tempted to compare the world delineated in the novel to our Earth.

The story is set in the twenty third century on an alienated planet called “Elone” which can also be dubbed as ‘Alone’ as we gradually begin to understand the word play. The planet is inhabited by antagonistic species. There is a boundary on the planet which is called “fence” that separates these inhabitants from one another . The author consciously represents both men and women independent of their needs. There are no strings attached and the otherwise natural reproductive link has been brought to an end. Much to the astonishment of the readers, each of the species can clone their offspring. However, one can not make a sweeping statement that the book is gender biased as it might apparently suggest. In fact, it diligently attempts to explore the possibility of cloning and a change in gender roles that may take place in the times to come.

The book starts with a death mystery of Seeni, one of the inhabitants of “Elone”. She is assumed to have been ‘taken’ (dead). Since the other part of the planet is inhabited by other species called men, Seeni’s disappearance raises a lot of doubts among the people of her own clan. She is believed to have been killed by the people on the other side of the ‘fence’. The actual cause of the death is investigated by a council of women. The entire story revolves around the murder mystery of Seeni and each layer of secrets pertaining to Seeni’s death is peeled off in a gradual but meticulous manner. We are introduced to a brigade of characters like Maya, Tioni, Tara, Iwe, Promly, Ultur, Seeni,Radul,Phatix, Blum, Odex, Durk and so on. Even the terminology used for days and time on Elone is quite peculiar and distinctive in its own way. For instance, we are introduced with the terms Nex, Lex, Vihan, Zacs etc. Though the use of difficult to remember names and a rush of characters does not impress the readers much and at times makes them somewhat uncomfortable too but it all fits quite well into the scheme of a science fiction. However, this may be because of the choice of the theme and the setting of the book that makes it feasible for the author to take recourse to such uncanniness. A serious reader will spontaneously but slowly be able to connect the dots and assimilate all the relationships in their profundity. Imagination is the epicentre of this science fiction and the writer seems to be blessed with the faculty of rich and ficund imagination. She picks a planet beyond the planet earth.

Life on Elone is quite in contrast and contradiction in the life we experience on this earth. The denizens of this planet are two species: men and women. They look upon each other as enemies. Elone is the brain child of Sadhna Shanker and she successfully and skillfully establishes a link with earth through the character of Maya. The music that Seeni used to listen and relish is the music that belongs to Maya who recounts the history of their people. People of Elone do not die unless they are killed which makes them almost immortal and imperishable. They can also replace their organs with the help of “Nepo”. Women are much advanced in technology and they have found an alternative called “Amar”, as the level of the mineral is waning. Men on the other hand have not been able to find any substitute for” Nepo”. Thus, they hatch a conspiracy to attack women in order to obtain the absolute control on the planet. Both men and women are oblivious of their origin and therefore have no idea of their actual lineage. The author gets full marks for weaving a strong and gripping plot. She dexterously narrates the story with the efficiency of a master raconteur. Every scene has been craftily designed beyond the boundaries of the chapters. The author elaborates every episode with minute details. For example, “in the window, the first rays of sunlight made an appearance. Maya’s music continued to play as dawn broke in a world that did not recognize it, but was still enthralled by it.” Besides, the author stunningly and scintillatingly succeeds in maintaining the suspense at every step of the story.

Sadhna’s thought process is incredible that helps her achieve a tight tone in the novel in which the Ideas are born from the union of reason, observation, imagination and quest. The basis of these ingredients may change, but as these concepts are never-ending, the ideas also remain intact . She marvellously juggles with the words and thus has got full control over her language and how she delves deeper and deeper into the innermost recesses of her characters reflects her skill and knack of characterisation. She resorts to intelligible language but the aesthetic sense of the book is not compromised at any juncture. She has used names and terms that would probably be used in future. She also provides glossary at the end of the book in order to help her readers understand the terminology employed in the novel and to make them feel at ease while journeying through its narrative. The fresh and original storyline catches the fancy of its readers. The mystery of Seeni’s death is revealed at the end of the novel. Much to the amazement of the readers, she is actually murdered by her own people only. The readers though gather an impression that her death was not necessary and thus could have been warded off. The author leaves no stone unturned to keep the flames of the interest of her readers smouldering throughout the entire book .

The novel is the most pertinent commentary on the position of the women in the present society. She also does justice with the genre throughout the book. The terms like science and technology are spread all over the pages of the book. She is definitely at her best capturing the whole spirit of a real science fiction in the this novel which is replete with believable bizarreness.

Sadhna Shanker is an Indian author, blogger and civil servant. Ascendance is her fifth book and second fiction work after “Never a Disconnect’ in 2010. She has written for the International Herald Tribune, Christian Science Monitor, Times of India, Hindustan Times, The Hindu, Indian Express, Huffington Post and The Wire. A PhD in Economics, she is a passionate wordsmith and has an avid interest in books, movies and theatre. She lives in New Delhi and is in the Indian Revenue Service.

His research articles have been published in various journals of international repute including The Tribune, The Hindu, The Hindustan Times, The New Indian Express, The Deccan Herald, The Hitavada, and The Daily post and in several newspapers of neighboring countries like Nepal and Pakistan. He has presented his papers at various universities in India and abroad. He is a guide for research scholars for M Phil thesis.